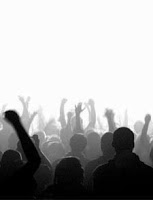 These are exciting times! The Lord is teaching us to fear Him as we learn to rely on Him, respond to Him and revere Him. Yesterday God showed us what attracts His manifest presence but also how the believer can hinder the tangible, experiential revelation of God. This is what He showed us:
Sacrifice demonstrates the believer's fear of the Lord
and attracts God's manifest presence!
We praise God for shining His light into darkness and exposing the influence of the enemy on our lives that causes us to rely on ourselves rather than on God.

This Tuesday we are starting a weekly discipleship class that will help our people become true followers of Christ and grow in their relationship with Him. Click here for more information.
This Sunday we are excited to have Bengt Wedemalm with us - a man of faith who attracts the manifest presence of God!
Quote of the week:

Posted by Richard Morschel at 18:16