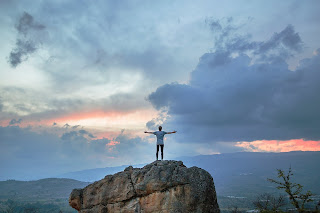 During these significant 180 days of prayer for a 180° reversal, God is showing us how He brings about transformation in our lives, the Church and our cities. In these past 3 weeks, the Lord has been speaking to us through Richard's daily devotionals and the sermons on Sunday about His presence, holiness and worship.

In his message entitled, "Broken for empowerment", Alexander spoke to us about how God brings about character transformation as we encounter Him in His holiness. Looking at the account of Jacob's encounter with the Lord in Genesis 32:22-32, we saw how God had to break Jacob's dependency on himself so that he would learn to lean upon God. Consequently, Jacob received a new name that would usher him into God's destiny for his life. Similarly God calls believers into their destiny as they take hold of their new identity in Christ and leave the old behind.

Two weeks ago we looked at the account of how the Ark of the Covenant was captured by the Philistines and how it was restored to Israel (see 1 Samuel 4:1 - 7:2 & 1 Chronicles 13 - 15). In his message entitled, "Hosting God's presence", Richard pointed out the holiness of God's presence and our need to learn to revere God's presence, host God's presence and guard God's presence. Just as David prepared a tent for God's presence, so God calls the Church to be prepared to host His presence in the fear of the Lord so that He is glorified in true worship and so that His people can walk in the fullness of His blessing.

On Sunday we had another powerful meeting as the Lord took us from worshipping Him into Christ's victory. Consequently, the Lord ministered His victory to many who came forward for prayer to receive breakthrough in various areas of their lives. Richard then shared a message in which he asked, "Are you amazed?" Looking at the account in Mark 6:1-6 of how Jesus went to His hometown and how the people were amazed at first but as they viewed Jesus in the natural they no longer believed, Richard showed us how Christians can lose their amazement of Christ and of one another! We noted how the people lost their amazement of Christ as they stopped seeing Jesus as God sees Him, as they became over-familiar with Him, as they no longer honoured Him and as they took offense at him. Consequently they moved from amazement to unbelief! In order to guard our amazement of Jesus and one another, Richard encouraged us to see others how God sees them, to be thankful, to be merciful, to focus on the good and to honour God and one another. As the Church develops a culture of honour and resists the spirit of over-familiarity, God's anointing can flow through God's people and Jesus can do many miracles! Halleluja!

Photo by Joshua Earle on Unsplash

Posted by Richard Morschel at 13:03