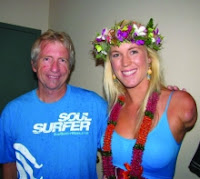 
Yesterday we had the privilege of having Rick Bundschuh and his wife, Lauren with us. Rick spoke to us about how God takes our failures, brokenness and weaknesses and uses them to shine His Light. He gave us many examples of people who experienced failure and tragedy but how God used each of those lives to glorify Himself. Rick also told us the amazing story of Bethany Hamilton who was attacked by a shark whilst surfing and lost her left arm. Bethany's story has been an inspiration to thousands around the world of how God gives our lives meaning and purpose and how He glorifies His name despite our weaknesses (see .1 Cor. 1:26-29; Rom. 8:28). Rick has written a book on Bethany's story, called Soul Surfer which has been filmed and was released in 2011 (click here for more info...). For more info on Rick and his ministry in Hawaii click here.

On Saturday 25 Februay at 3pm (venue to be announced), KLF will be having a church get together where anyone who considers KLF to be his or her church or is interested in KLF can find out more about who we are, what we are here for, where we are going, what we are doing, what we are planning etc.

Posted by Richard Morschel at 11:13